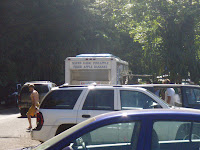 According to Los Angeles criminal defense lawyers, the California Highway Patrol a third man has died at a San Jose hospital after sustaining injuries in last weekend’s wet weather. The man has been the third to die was in the first of three fatal weekend crashes and has been identified as 24 year old Alex Booth a resident of Aptos.

Booth was involved in a crash in the area of Rio del Mar on Halloween night while riding his motorcycle traveling northbound in the vicinity of Sumner Avenue at approximately 11:35 p.m. According to reports by the California Highway Patrol Officer Grant Boles he was on a sweeping right hand turn when he lost control of a 2008 Suzuki motorcycle. Officer Boles also stated Booth was not wearing a helmet at the time of the accident and was traveling at an unsafe speed. The California Highway Patrol officers on the scene were told by acquaintances of Booth that he had been drinking, the officers did not smell alcohol and did not begin a DUI investigation.

The second of these fatal weather related accidents occurred on Highway 1 when a 53 year old resident of Santa Cruz identified as Hipolito Perez Magana lost control of the 2003 Toyota Tacoma. Magana was driving in the northbound lanes in the vicinity of 41st Avenue. According to the California Highway Patrol at the time of the crash it was raining heavily and the rear tires on the Tacoma showed signs of being bald. The truck flipped several times and was facing southbound in the northbound lanes when it came to a rest on its wheels.

The third fatal accident occurred Sunday according to the California Highway Patrol when a man identified as 72 year old Dirk Sundman of Santa Cruz lost control of a 2005 Vespa scooter. The accident occurred on Highway 9 in the vicinity of the Santa Cruz and Santa Clara county line. The California Highway Patrol reported that the roadways were wet at the time of the rain related dui accident and Sundman was not wearing a helmet at the time of the crash.

Next Post: Riding Your Motorcycle Is The Safest Thing To Ride For Transportation