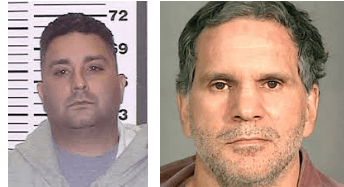 Preet Bharara, the United States Attorney for the Southern District of New York, William F. Sweeney Jr., Assistant Director-in-Charge of the New York Field Office of the Federal Bureau of Investigation (“FBI”), and James P. O’Neill, Commissioner of the New York City Police Department (“NYPD”), announced today the filing of an Indictment charging CHRISTOPHER LONDONIO and TERRANCE CALDWELL with offenses related to their alleged role in the November 15, 2013, murder of Michael Meldish, as well as their participation in a long-running racketeering conspiracy composed of leaders, members, and associates of La Cosa Nostra, also known as the “Mafia.”

LONDONIO and CALDWELL are charged with racketeering conspiracy, conspiracy to commit murder, murder, and firearms offenses. CALDWELL is also charged with assault and attempted murder in aid of racketeering, in connection with his alleged role in the shooting of a Bonanno Family member on May 29, 2013.

CALDWELL was presented last Friday, February 10, 2017, before the Honorable Lisa Margaret Smith at the United States Courthouse in White Plains, New York. LONDONIO was already in custody on state charges and will be transferred to federal custody and is expected to be presented in White Plains federal court today. The case is assigned to United States District Judge Nelson S. Román.

An initial pre-trial conference is scheduled for February 15 at 1:45 p.m. before Judge Román.

Manhattan U.S. Attorney Preet Bharara said: “The mob continues to kill and maim in the name of La Cosa Nostra, and as alleged, Christopher Londonio and Terrance Caldwell did just that. In a misguided show of allegiance to this violent way of life, Londonio and Caldwell allegedly murdered Michael Meldish and attempted to kill a Bonanno Family soldier. We thank the FBI, the NYPD, and the Bronx County District Attorney’s Office for their dedication that led to the federal racketeering charges announced today.”

FBI Assistant Director-in-Charge William F. Sweeney Jr. said: “Hollywood and popular fiction almost romanticize the mob, so much so the general public may not know it exists in real life anymore. However, the crimes members are accused of taking part in are violent and all too real for their victims. The men charged in this case allegedly committed murder, robbery, dealing illegal drugs and extortion to only name a few. The FBI Organized Crime Task Force investigates these families and their string of criminal behavior each day, proving the mob is still a legitimate threat to the community.”

NYPD Commissioner James P. O’Neill said: “This is further proof that the mob’s rackets, schemes, and violence are persistent. As alleged, the defendants engaged in ruthless violence, including the murder of Michael Meldish in the Bronx and the attempted murder of a Bonanno solider in Manhattan both in 2013. Our thanks to the thorough work of NYPD detectives, FBI agents, and prosecutors in the Southern District that led to today’s indictment.”

According to the allegations in the Indictment, which was filed in White Plains federal court on February 8, 2017[1]:

La Cosa Nostra is composed of leaders, members, and associates who work together and coordinate to engage in a multitude of criminal activities. La Cosa Nostra operates through entities known as “Families.” In the New York City area, those families include the Genovese, Gambino, Luchese, Bonanno, Colombo, and Decavalcante Families. Each Family operates through groups of individuals known as “crews” and “regimes.” Each “crew” has as its leader a person known as a “Caporegime,” “Capo,” “Captain,” or “Skipper,” who is responsible for supervising the criminal activities of his crew and providing “Soldiers” and associates with support and protection. In return, the Capo typically receives a share of the illegal earnings of each of his crew’s Soldiers and associates, which is sometimes referred to as tribute.

Each crew consists of “made” members, sometimes known as “Soldiers,” “wiseguys,” “friends of ours,” and “good fellows.” Soldiers are aided in their criminal endeavors by other trusted individuals, known as “associates,” who sometimes are referred to as “connected” or identified as “with” a Soldier or other member of the Family. Associates participate in the various activities of the crew and its members. In order for an associate to become a made member of the Family, the associate must first be of Italian descent and typically needs to demonstrate the ability to generate income for the Family and/or the willingness to commit acts of violence.

From in or about 2011 up to and including in or about 2017, LONDONIO and CALDWELL, along with other members and associates of La Cosa Nostra, committed a wide range of crimes, including murder, attempted murder, assault, robbery, extortion, gambling, and narcotics trafficking. In particular, and as charged in the Indictment, on May 29, 2013, CALDWELL attempted to murder a Bonanno Soldier in the vicinity of First Avenue and 111th Street, in Manhattan. Separately, and as also charged in the Indictment, on November 15, 2013, LONDONIO and CALDWELL together murdered Michael Meldish in the vicinity of Baisley Avenue and Ellsworth Avenue in the Bronx.

Mr. Bharara praised the outstanding investigative work of the FBI’s Organized Crime Task Force, which comprises agents and detectives of the FBI, NYPD, Homeland Security Investigations, and the Waterfront Commission of New York Harbor. He also thanked the Bronx County District Attorney’s Office. He added that the investigation is continuing.

Assistant U.S. Attorneys Jennifer E. Burns, Scott Hartman, and Hagan Scotten are in charge of the prosecution. The case is being handled by the Office’s Violent and Organized Crime Unit and White Plains Division.

Life in prison
2
Conspiracy to murder in aid of racketeering

3
Murder in aid of racketeering

20 years in prison
5
Carrying and using a firearm during and in relation to, and possessing a firearm in furtherance of, a crime of violence, resulting in the death of another

Life in prison or the death penalty

Mandatory minimum 5 years in prison consecutive to any other sentence
6
Carrying and using a firearm, which was discharged, during and in relation to a crime of violence