[vc_row][vc_column][vc_column_text]A tough plaintiffs’ firm with a reputation for suing banks and large corporations is now squaring off against the Trump Administration.

Cohen Milsten Sellers & Toll is acting for Citizens for Responsibility and Ethics in Washington in its lawsuit against President Trump according to the WSJ Law blog and reported on the CohenMilstein website.

The court documents reveal that the watchdog group alleges a constitutional violation by the President  by maintaining ownership of businesses that accept payments from foreign governments.

CohenMilstein provided financial support to the Clinton campaign and is acting pro bono on the current case.

The WSJ quoted Sellers saying:  “I don’t think it’s fair to characterize this as mounting a campaign against the Trump administration.”

In recent years, the Cohen Milstein has savaged banks with lawsuits alleging foul play that contributed to the financial crisis. The firm said its cases have resulted in more than $2 billion in mortgage-backed securities settlements. 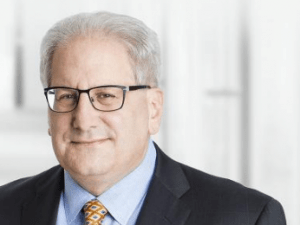 discrimination in all forms and other illegal employment practices individually and through class actions, with a track record of considerable success.

The firm’s profile:  Powerful corporations sometimes trample the rights of individuals and smaller businesses. Litigation is often the only avenue to compensate victims of corporate wrongdoing. For over 45 years, we have fought corporate abuse, pursuing litigation on behalf of affected individuals, whistleblowers, public entities and other institutions in cases that have raised challenging, significant and often novel issues.  Cohen Milstein specializes in holding large corporations accountable for their actions even though they often have significantly more resources than those damaged by their misconduct.

Next Post: Ever Wondered What Divorce Lawyers Think of Marriage? Here’s What