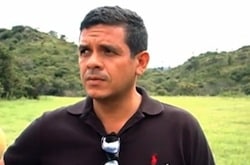 Joon H. Kim, the Acting United States Attorney for the Southern District of New York, announced today that FABIO PORFIRIO LOBO was sentenced to 288 months in prison for conspiring to import cocaine into the United States.  LOBO pled guilty on May 16, 2016, before U.S. District Judge Lorna G. Schofield, who imposed today’s sentence.  LOBO’s father, Porfirio Lobo, served as president of Honduras between 2010 and 2014.

Acting Manhattan U.S. Attorney Joon H. Kim said:  “By his own admission, Fabio Lobo conspired to import huge quantities of cocaine into the U.S.  To assist traffickers and enrich himself, Lobo used his father’s position and his own connections to bring drug traffickers together with corrupt police and government officials.  Now, Fabio Lobo has been sentenced to the substantial prison term his crimes merit.”

According to the Indictment, other court filings, evidence presented during a sentencing hearing held on March 6 and 16, 2017, and statements made during other court proceedings:

Before and while LOBO’s father was president of Honduras, LOBO used his and his father’s reputation and political network to broker corrupt connections between large-scale Honduran drug traffickers and individuals within the Honduran government, including high-level officials such as sitting Honduran congressmen as well as customs, military, and law enforcement personnel.  By managing security and what LOBO described during a recorded meeting as “logistics” for these criminals, LOBO facilitated and participated in extensive cocaine trafficking with strong support from multiple elements of the Honduran government.

LOBO’s participation in drug trafficking began as early as 2009.  During that year, while LOBO’s father was running for president of Honduras, LOBO’s father began receiving bribes from members of a drug-trafficking organization known as the Cachiros, which was a prolific and violent criminal syndicate that relied on connections to politicians, military personnel, and law enforcement to transport cocaine to, within, and from Honduras.  The leaders of the Cachiros paid Porfirio Lobo over approximately $500,000 in exchange for, among other things, political protection from law enforcement investigations, prevention of extradition to the United States, and awards of contracts by Honduran government agencies to money-laundering front companies controlled by the Cachiros.

LOBO was introduced to the Cachiros initially as an individual who was willing to facilitate the award of Honduran government contracts to the Cachiros’ front companies, which were used to increase the appearance of their legitimacy and to launder drug proceeds.  LOBO soon began protecting and supporting the Cachiros by acting as a conduit to Honduran officials capable of preventing interference with their drug trafficking operations.  Between five and eight times, theCachiros provided LOBO with advance notice of incoming drug loads so that LOBO would be available in the event of any interference with the shipments.

In 2012, LOBO participated more directly in the violent drug trafficking of the Cachiros.  LOBO proposed to the Cachiros receiving cocaine-laden aircraft at locations in the Olancho Department of Honduras, and he personally helped escort two loads of drugs with an aggregate quantity of approximately 1.4 metric tons of cocaine.  In connection with the transportation of those cocaine shipments, LOBO brought members of the Honduran military, who were armed with an AR-15 machine gun as well as pistols, for security, and LOBO personally rode with one of the leaders of theCachiros so that LOBO would be able to place calls to Honduran officials in the event of any law enforcement interference.  For his participation, LOBO received, among other things, approximately $70,000 in cash, an armored vehicle, and an AR-15 machine gun.

LOBO also assisted drug traffickers other than the Cachiros.  In approximately 2012, LOBO assisted a maritime drug trafficking venture at Puerto Cortes, a large commercial port on the north coast of Honduras near the Honduras-Guatemala border, involving Fredy Renan Najera Montoya (a Honduran congressman), a Honduran customs official, a high-ranking member of Mexico’s Sinaloa Cartel, Carlos Lobo (another Honduran drug trafficker who is not related to LOBO), and others.  LOBO made at least approximately $50,000 for participating in meetings regarding the shipments.  LOBO also used his political access to protect and assist Carlos Lobo by helping him try to recover seized assets in exchange for approximately $100,000.

Beginning in or about 2013, the Drug Enforcement Administration (“DEA”) captured some of LOBO’s drug trafficking activities on tape after the leaders of the Cachiros started to covertly provide information and assistance to the United States government.  Following public financial sanctions and asset seizures targeting the Cachiros in September 2013, LOBO stepped in to help coordinate on behalf of the Cachiros the receipt, protection, and transportation of a multi-ton load of cocaine for purported representatives of now-detained alleged Mexican kingpin Joaquin Archivaldo Guzman Loera, a/k/a “El Chapo.”  Expecting to make millions of dollars for a shipment of approximately 3,000 kilograms of cocaine, LOBO met with confidential sources acting at the direction of the DEA (the “CSes”), agreed to provide military and “logistics” support to these purported drug traffickers, and facilitated introductions to at least two Honduran military officials.

Seven of the Honduran National Police Defendants, including, among others, MARIO GUILLERMO MEJIA VARGAS (“VARGAS”), CARLOS JOSE ZAVALA VELASQUEZ (“VELASQUEZ”), and VICTOR OSWALDO LOPEZ FLORES (“FLORES”), were subsequently indicted by a grand jury in the Southern District of New York for firearms and/or drug trafficking offenses.  On July 11, 2016, VARGAS, VELASQUEZ, and FLORES waived extradition in Honduras and surrendered voluntarily in Manhattan.  FLORES, VELASQUEZ, and VARGAS have since pled guilty in federal court to conspiring to import cocaine into the United States, and they await sentencing by Judge Schofield.

In addition to the prison term, LOBO, 46, was ordered to pay a $50,000 fine and to forfeit $266,667, which represents the proceeds he received from his drug trafficking offense.

This case is being handled by the Office’s Terrorism and International Narcotics Unit.  Assistant U.S. Attorneys Emil J. Bove III and Matthew J. Laroche are in charge of the prosecution.

Next Post: The Law’s “Robot Apocalypse” – Why Millenials Are Sceptical About The Future Law Firm