The JFK Files – Will Trump Release Them All?

The understandable hoopla and conspiracy breath-holding over the “release” of the JFK files may see an addition to those who think there were any number of conspiracies involving the assassination of JF Kennedy.

Salon produced a piece on the “9 Big Questions” about the JFK files that Donald Trump is to release with one key factor that stands out – not everything will be released.

The tens of thousands of files held by the CIA and FBI will help bring some light to bear on the assassination, but other questions are likely to emerge, according to Altnet’s Jefferson Morley, a long-time student of the assassination.

Will there be a postponement?  Will they all be released?  Will Trump rreceive “further information”? 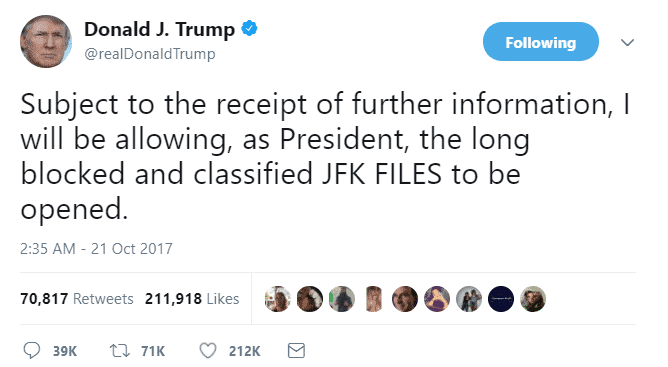 The Washington Post has reported that the National Security Council has recommended postponing the release of some JFK files. I expect that will happen and we will not see all the CIA and FBI records scheduled for release.

If so, remember this: The JFK files Trump withholds will be more important than what he releases.

But what Trump refuses to release or withholds may well be more significant that the files released on the JFK killing.

One leading theory, favored by mainstream news organizations, is that an ex-Marine named Lee Harvey Oswald, who was of long-standing interest to senior CIA officials, shot and killed JFK for reasons known only to himself.

The other most plausible theory is that JFK was killed by his enemies, who manipulated Oswald into taking the blame.

Meanwhile, let’s see if the President releases all files – or some – or none?

President Trump has delayed releasing all the JFK files.

The President acceded to pressure from the FBI, CIA and other agencies  still seeking to keep some final secrets from the 54-year-old investigation.

The president allowed the immediate release of 2,800 records by the National Archives, following a last-minute scramble to meet a 25-year legal deadline.

In a memo released by the White House, Trump said: “I am ordering today that the veil finally be lifted. At the same time, executive departments and agencies have proposed to me that certain information should continue to be redacted because of national security, law enforcement, and foreign affairs concerns.

Next Post: Meet the New Attorney General – 7 Things To Know About David Parker