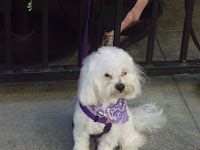 According to reports by dog bite lawyers in Los Angeles here, the attorney of flight attendant Lisa Wilson, William Cafaro has stated they will be adding Marc Anthony to the dog bite lawsuit that was filed after Plaintiff Wilson was aboard a private jet in which Lopez, Anthony and their guard dog Floyd were passengers when she was attacked by the canine.

According to court documents filed in Brooklyn Federal Court, Wilson who works for NetJets Inc., had been given instructions how to behave around the dog. Approximately an hour into the flight from the Republic Airport in Farmington, Long Island, N.Y. to Burbank California the dog lunged at Wilson when she was walking past the canine. Floyd attacked Wilson biting her pants leg causing her to fall. According to Wilson and her attorney this caused her to fall injuring her back and has been unable to work.

In the suit Wilson is seeking $5 million dollars in damages from Lopez and Nuyotican Productions a company owned by Lopez.

If you or a family member have been the victim of a dog bite attack there are experienced dog bite attack attorneys, in Orange County skilled personal injury attorneys can be reached by calling 888-400-9721.