The Ghost of Scalia Passed Visits The Trump Wall 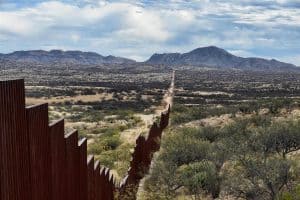 One of the Judge’s last judgments could create a major obstacle to the Trump plan in a twist that would see a man the President considers a “great” jurist placing a significant obstacle in his way towards creating another great wall.

Michigan v. Environmental Protection Agency is a decision that blocked an EPA ruling regarding mercury emissions from power plants pursuant to Clean Air Act requirements underwhich the EPA must act.

The President’s wall plan requires reliance upon the Secure Fence Act, which permits the secretary of Homeland Security to take such action that is both “necessary and appropriate”.

The wording is significant because it is these words – in reverse order – that he ruled upon in the Michigan case and where he said that the “billions of dollars in economic costs” were for only a “few dollars” in benefits.

This is just the argument that could stymie the President’s Mexico wall, heartening opponents and Democrats among others.

Next Post: The 4 Major Obstacles STILL Facing Women in the Legal Profession

Some Great End-of-Year Questions For Clients