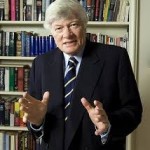 High profile Australian Queens’ Counsel Geoffrey Robertson has issued calls for the indictment of the former Pope Benedict XVI on charges of covering up child sex abuse charges for the Catholic Church.

Robertson made the charges at a screening of the documentary Silence in the House of God: Mea Maxima Culpa (trailer below).

The high profile barrister who has run his own television programs and appeared for Julian Assange the Wikileaks founder, is not unused to controverial trials and public debates involving State and private issues of high importance.

Robertson, who appeared in the documentary had given evidence to the UN Committee on the Rights of the Child where he aruged that Pope Benedictacted negligently in what Robertson estimates to be 100,000 cases of sex abuse by priests since 1981, when Ratzinger became head of the Vatican office known as the Congregation for the Doctrine of the Faith.

Ratzinger’s resignation in February means he is no longer protected by head-of-state immunity in the international criminal court (ICC) and Robertson argues that the Vatican should lose its status as a state in any event.

A crime against humanity under the ICC statute includes rape and sexual slavery as well as inhumane acts causing harm to mental or physical health, which are committed against civilians on a widespread or systematic scale and condoned by a government or a de facto authority.

Share this article:
Previous Post: Winn At All Costs And What Lawyers Can Learn From This Man

Next Post: Prison for Participant in Fraudulent Credit Repair Scheme